It’s been just over a week since my last post, eight days that have been among the darkest in Cardinal history.   In the end, the events and reasons that led up to the car crash that claimed the life of Josh Hancock are what no one wanted to hear.  But despite the controversy and crizitcism that’s been flying around the baseball and media worlds since last Sunday morning, that fact of the matter is that a young man still lost his life far too soon.

The team, as they did in the immediate aftermath of the death of Darryl Kile, struggled, getting swept by the Milwaukee Brewers.  The Cardinals said "good-bye" to Josh on Thursday, in his hometown of Tupelo, Mississippi.  The came home on Friday to play the Houston Astros, winning for the first time in a over a week.  The final score of the game was 3-2.  Hancock’s uniform number was 32.

In the midst of an already tough week, the Birds announced Saturday that ace Chris Carpenter will miss three months thanks to elbow surgery.

Can the Cards pull out of this "slump" that they’ve been riding since the beginning of the season?   Can they pull themselves together, as they did after Kile’s death, dedicate the season to Josh, win the Central, and make a descent showing in the playoffs?  Can they overcome the multiple injuries they’ve been handed?  Only time will tell.  But for now, once again, we’re reminded that ultimately it is just a game and that there are in life, things more important than the game of baseball.

It may sound cliche, but today proves, once again, that there is indeed, crying in baseball.  It’s utterly heartbreaking.  For the second time in less than five years, my beloved St Louis Cardinals have been rocked with the loss of one of their own.  I didn’t know Josh Hancock.  Despite getting the opportunity to meet nearly the entire bullpen at Spring Training, I never as much came across Josh one of the practice fields.   Still, on this beautiful April Sunday, Cards fans all over the country surely flashed back to June 22, 2002, when starting pitcher Darryl Kile died of a heart attack in his hotel room in Chicago.  Legendary announcer Jack Buck had passed away just a few days before.

A heart attack and a car accident; at the surface, the circumstances couldn’t be more different.  The lingering effects of Kile’s death are still evident around Busch Stadium, from the black circle on the dugout wall, to the plaque in the clubhouse, to the tattoo on Jim Edmonds’ wrist.   Like 2002, the team, the city, the fans will struggle in the coming days.  I already am.  Ironically, both pitchers lives were lost in the midst of series versus the arch rival Chicago Cubs.  Both times, the games have been postponed, because sometimes, there are just things more important than baseball.  Both times, Cubs fans have gone out of their way to be accomodating, and for that, I thank them.

Once again we are reminded, brutally, that life is all too short and all too precious.  To tell our friends and family what they mean to us while we can.  To do what we can for others while we still have the time.  To give of ourselves.  To enjoy the little things.  To realize that it is just a game, and that despite the fact the defending World Champions are off to a slow start, we’re blessed enough just to have that World Championship.

In the meantime, Josh, I have no doubt that you are in heaven, in now what has become the Cardinals Official Cheering Session.   Thank you for helping us to the World Series last year, and for being the only player to show up at the World Series DVD premiere party.  May you rest in peace.  I know Jack Buck, Darryl Kile, and Darrel Porter have welcomed you with open arms.  You’re in good company, and you’ll be truly missed.  By  your fans, by your teammates, by your family.

"Thanks for the time, this time; until next time – so long for just awhile!"  ~ Jack Buck

So a few days since I’ve written, eh?  And yes, I know, the off day is gone.  But thanks to a computer meltdown, I’haven’t had a chance to update til now.

Every diehard baseball fan knows what I’m talking about.  Off days are horrid.  Especially when the happen to fall upon one of your days off from work, and you’re stuck with pretty much nothing to do.  The Tuesday nights game was delayed by rain.  Apparently a monsoon decided to descend upon the Midwest.  I’m  not a patient person.  I don’t like to wait for anything, let alone baseball.  Which might explain some of my frustration to the Cardinals to this point.   They’re slow start has been equal parts painful and frustrating, with a a little "cute" and "hilarious" thrown in now and then.  (How, how… did we get beat by Jason Marquis?!)  But hopefully now, given the last couple of games, they’re back "into the swing" of things.  More guys are putting the ball into play, working the counts a little fuller, taking better swings, and yes… actually winning a game or two.

It’s the Cubs this weekend, one of sports best rivalries at it’s finest.  We took two-of-three last weekend; it is my sincere hope I can pull out my broom by weekends end. 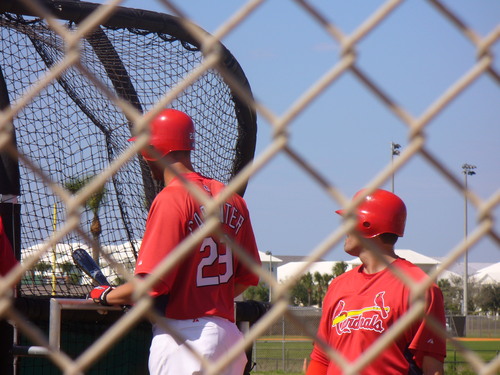 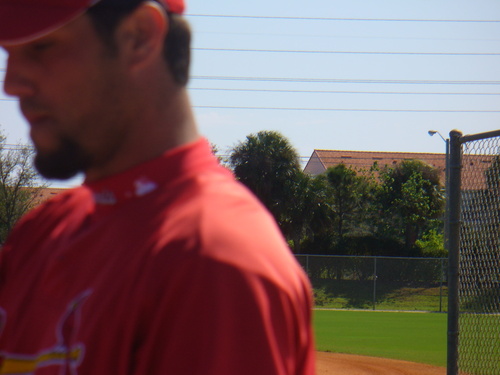 Hahaha.. Tyler. Stupid fan pushing me out of the way. 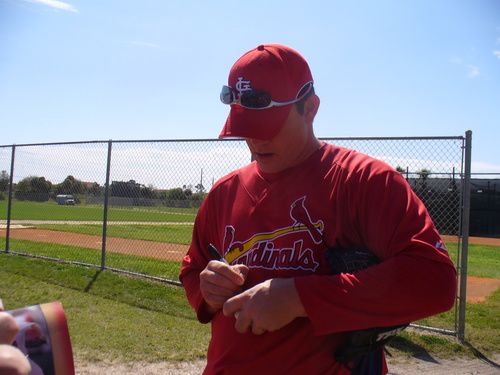